I was close to seeing my book in print. It was finished, but still really rough. It wasn’t important to have the cover be perfect at this point. In fact, it didn’t need a cover at all, but I was interested to see what a finished book from CreateSpace would look like. And just like the formatting adventure, it was something new to learn.

As I mentioned before, CreateSpace offers professional help to produce a good looking novel. But in the spirit of the self-publisher who wants to go it on his own, there is also a cover creator program on the website. There were several themes to choose from, each with a different color scheme and with varying picture sizes. The program is pretty straight forward, and you could probably whip out a cover in a half hour or less.

But I knew I would eventually want something different, so I decided to experiment. But I didn’t have any photo editing experience outside of the very basic cropping. More things to learn.

Still not wanting to spend any money, I went searching the web for a free program. From what I found, it appeared that the program gimp (GNU image manipulation program) was one of the best. I downloaded the program, as well as a very helpful manual produced by one of the discussion board regulars, and set about trying to learn to make a cover.

Like the movie making software I have used in the past, the gimp program could do far more things than I would ever need. As is true of many non-entry level programs, it was not incredibly intuitive to use, but the manual helped tremendously. But just like the formatting of the Word doc, there were still hair-pulling moments where I didn’t understand why things weren’t working.

I was still in the messing around stage of things, but I wanted the cover to look as nice as possible. There were several old photos that I thought I could use, but they were taken with an old camera and the resolution was not good enough to fit without blowing them up. I saw a cover of a book at my girlfriend’s house that reminded me of a photo I had taken at the Grand Canyon. It had nothing to do with what the book was about, but it was a nice shot and I thought the color scheme worked.

This is what the test run of the book ended up looking like: 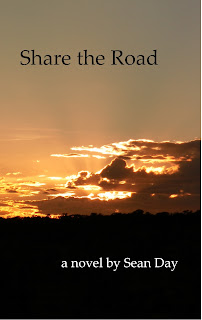 I sent everything off to CreateSpace and I had a novel proof in my hand in less than a week. I knew it wasn’t really a novel, but is sure looked like one. It was a great feeling.

I noticed a couple of formatting errors (my mistakes), made some quick changes and ordered a couple more copies. Now it was time to pass them out to the first people who would read them. Yikes.

After a couple of rounds of editing, it still wasn’t near ready for prime time, but it felt like there was enough there worth working on. But of course how I felt about it would change day to day, paragraph to paragraph. I needed to get the book out of my hands and get someone else’s opinion. I could have just printed it out, but I had the opportunity for something a little nicer.

NaNoWriMo is a non-profit organization, and they depend on the support of both users and corporate sponsors. Some of the sponsors provide discount codes to participants, and others offer prizes for those who make it to the 50,000 word goal.

One of those prizes was a free paperback proof from CreateSpace, a print on demand company owned by Amazon.com. The coupon for a free proof expired sometime in June, and I didn’t want it to go to waste. But of course I couldn’t just send them a Word file and expect it to turn out looking like a book.

Fortunately, they provide lots of help for the first time novelist. They offer professional services that you can buy piece-meal, as well as some help for the do-it-your-selfer. Not only are there guidelines and FAQs on the site, but there is also an active discussion board where people that have been through it all can pass on their wisdom.

The first step was to get the Word doc formatted to work as a paperback. CreateSpace has Word files on the site that you can use as a template, and they come in various sizes for your desired book size. This made things much easier than starting from scratch, but even so, there were many hair pulling moments trying to get the page numbers and blank pages to work. I was using features I hadn’t used before, and trying to learn how they worked by trial and error.

After much cutting and pasting, references to the help files, and heavy use of the undo key, it was starting to look like a book without a binding. Now I just needed a cover.

Another place to find me

Publishing on the Kindle

On Writing by Stephen King

I Should Be Writing Podcast

The Newbie's Guide to Publishing

Buy all your Amazon goods here and help support a poor writer.